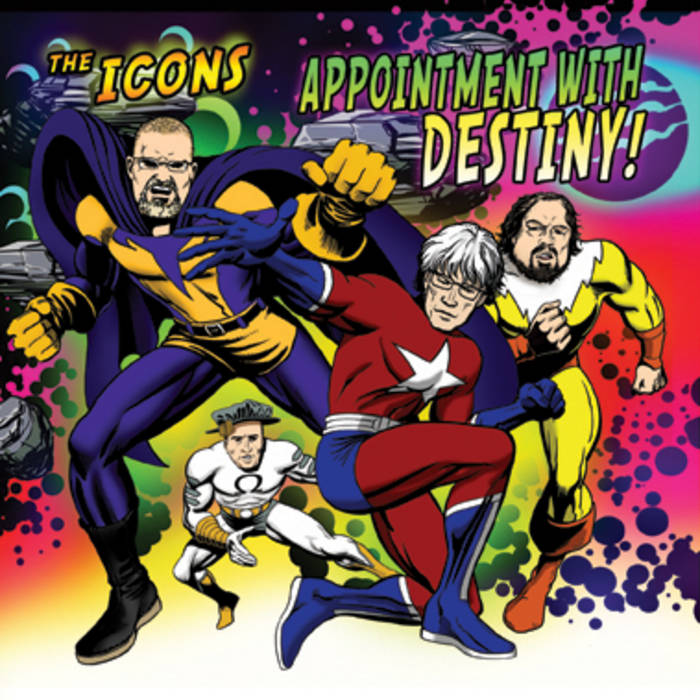 It is their second record in twenty five years. They don’t necessarily like to rush things.

Recorded and mixed over the course of a year at Icons Underground World Headquarters in Seattle, Destiny is built around the songwriting prolificacy and prowess of singing guitarists Tom Dyer and Steve Trettevik simultaneously featuring Hades’ own rhythm section, James Gascoigne on drums and Rick Yust on bass and vocals. Destiny also includes Rick’s compositional debut on the dreamlike nightmare that is Made by Parker Posey. Add in Green Pajama Jeff Kelly’s Dancin’ in the Jailhouse and you’ve got sixteen brutally fresh, intoxicating songs.

Appointment With Destiny! delivers with a delicate punch the pain and joy of what it is to be human today ... well, perhaps not. But it is packed with tuneful thrashing, songs of Love and Unrequited Love, songs of Life and songs of Death, songs of Space Aliens and songs of the Medical Profession—the true Heart and Soul of four misguided post-modern troubadours. Have mercy.

How did we come to this spectacular and fateful day? The story goes like this.

The Icons fired up in 1983. Tom finished his Seattle art/punk band The Adults. In his four-track studio, he and Steve started recording various dopey studio projects like Stevie Nations & the United States, the Rude Dudes, Sherry & the Mudmen, and Group Sex. Classy stuff. It was time for a real band. Tom said to Steve, “get the name right - the rest is easy.” The Icons was the name and The Icons was the deal. Drummer Tim Nelson (R.I.P.) was next lured into the pack. Truth - Rick was seduced to join the band by perfectly grilled meat. Who could resist? And there were four Icons. It was good.

The Icons rehearsed like maniacs and recorded, a lot. Tape was running, a lot. The band was soon playing for the people semi-regularly around town. These were heady times, with all the playing for the people, and it was good, damn good. But there was soon trouble in paradise. Tim found himself conflicted between his Iconship and some higher calling. Tim was out. Way out. The Icons invited the Queen Annes’ James Gascoigne to pound skins. James and the band agreed to terms and there was food and merry drink, and more drink, for all.

Fame and fortune escaped this fantastic foursome. However, neither fame nor fortune were the goal, the intention. Playing the music for the people was the calling. And the noise, it was always the noise. By 1986, the Mission was accomplished. The Masters of Disaster came forth on cassette The Icons were no more. And it was good.

Silence until 2003 – then, suddenly, a 4 minute film The Icons – Proof That They Rocked is shot in 48 hours by Jen Peel and crew for the Seattle International Film Festival Fly Film. Tom flies in from Boston and by dumb luck sees it on TV from a hotel room at the Hilton. It can still be seen on Channel 9 PBS in Seattle from time to time. The film confirms their growing obscurity.

Next stop - the summer of 2009. The Icons were called forth to do a Green Monkey Records reunion show. The Icons rocked the house. It was fun. It was loud. It was just too good. What was left to do?

Bake the multi-track tapes from the Masters of Disaster. Remix it. Add some stuff. Put it out. Done. Make their second record? It was time.

Destiny is the fruit of their new calling. But that is just the beginning. The Icons will not be denied twice. This time The Icons are bigger and better and prettier than ever. This time the calling is fame, glory and riches beyond all imagination.

And that dear reader, concludes our tale. We all have a part to play in this story. Answer the call and do your part. Be part of real history. Sell your soul if you must.

Your Appointment with Destiny awaits!