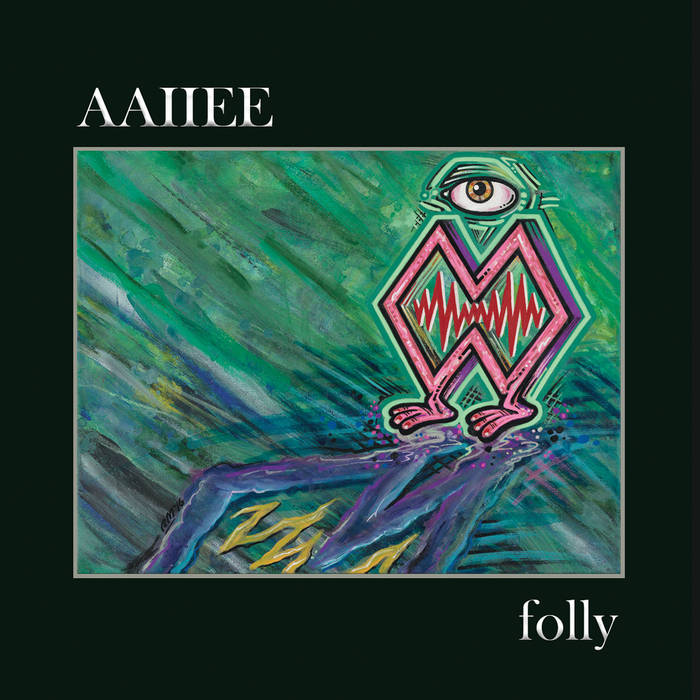 Pronounced as a guttural scream, with “AAIIEE” being the approximate phonetic spelling. Folly is their second full-length album, a proud follow-up their delightful 2012 tribute to the 1962 World’s Fair, See You In Seattle. That album was so good it made my top ten for the year. This one is even mo’ better.

Folly is a pure and delicious Pacific Northwest gumbo, with an eclectic offerings ranging from barn-recorded smash-rockers like “Keep Clam” (a tribute to “Old Seattle” icon Ivar Haglund) to the dreamy psyche-jazz-prog of the epic, wandering title tune. However, there is no song stranger than the opener “The Sportsman” a psychotic angling tale with a monster fish inside a grain silo. Not now. Not ever. So beautiful. This song made me love this band.

AAIIEE - See You In SeattleAAIIEE started in 1981, but I had never heard of them until I saw a Facebook invite for their show with the short-lived Gum at Darrell’s. Didn’t go, said wot is AAIIEE and ended up buying See You in Seattle within minutes. I thought it was just great. Who else could deliver a song that has an opening line “I want to ride in the Bubbleator” with such conviction? No one – that’s who! Plus, it sounded great in my car.
So why hadn’t I (and most of you) heard of these guys if they been around for one million years? Dunno. So, let’s do the history lesson: Jeff “Lar” Larson and Johnny Vinyl, veterans of early Seattle punk bands team up with jazzbo Craig Flory and drummer David Shumate to form AAIIEE, a genre-defying band who loved Pere Ubu (doesn’t everyone?), the Ramones, Sparks and everything in between. AAIIEE debuted in 1981 at a gig with Seattle legends the Fastbacks and the U-men. AAIIEE saw zero problem with using cellos, clarinets and saxophones while playing to hardcore punks. AAIIEE's refusal to fit any mold allowed them to play with a plethora of bands. That however, along with their casual approach to most matters, made it difficult to find a rabid following and they remain obscure (That will absolutely change with this new album).AAIIEE

That version of the band went down the tubes by the mid 80s (though they somehow managed to release a 7” EP in 1990). Flory and Shumate were replaced by a second guitarist the affable Greg Stumph and precision drummer Brent Petty. Newly inspired, AAIIEE performed at innumerable dive bars, pizza joints and Ivar tributes plus appeared on a numerable fine comps. Then, See You In Seattle. Now, a mere five years later, Folly. BOOYAH!

Recorded by Johnny Vinyl at Shakey’s Doghouse, Vinyl Manor and The Big Building
Mastered by Tom Dyer at TDS