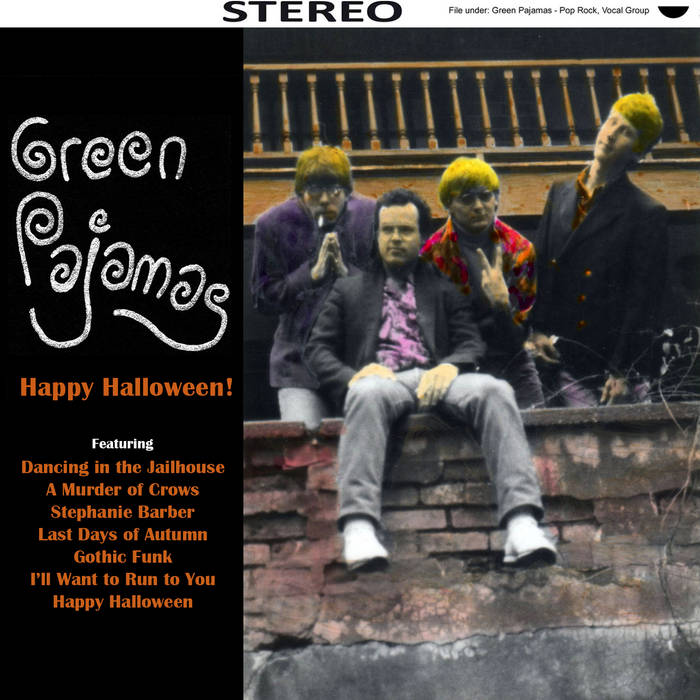 THINKING ONLY OF YOU (LUST DON'T LAST)
youtu.be/-o8pjH-8Z0U

The Green Pajamas spent the long lazy summer of 1984 basking in the Summer Of Lust. We had jam sessions in the attic room of my parents’ house in West Seattle where, at 20, I still lived. Jeff, four years older than me, was also still living in his boyhood room at his parents’ house two blocks away. I believe that this lack of responsibility, this extended childhood existence in which we lived, heightened our creativity. It certainly afforded us the time to devote to so much music. It seems like almost every night we got together with the gang of girls in my backyard for a barbeque or a bonfire trimmed with guitars and singing. As summer waned we moved inside and started recording more. Soon the chill of autumn pervaded our music. We decided we should put out another tape, a follow up to Summer Of Lust, which had been released on cassette that spring.

The basic sessions for Happy Halloween! were recorded in October 1984 in a windowless jam room that we’d set up in the basement of our drummer Karl Wilhelm’s house. Karl’s older brother Larry was living there and he ended up playing on a few of the sessions. He had just bought a small Casio MT-68 keyboard at Kmart and we were quite taken by it. Jeff and I ran out and bought one for ourselves. That Casio was pivotal on several of the songs recorded in the Wilhelms’ basement: Murder of Crows and Last Days Of Autumn were cut with Jeff on drums, me on the new Casio, and Larry Wilhelm on guitar. Gothic Funk had Jeff on guitar, me on the Casio, and Karl on drums, while Happy Halloween had Jeff on guitar, Larry on Casio and our pal Julie Lawrence on drums. (Julie’s brother Steven Lawrence was soon to join the band in November).

The eight songs that make up Happy Halloween! were recorded very quickly over the course of a week or two with a deadline of having it done by Halloween. To round out the album, I’ll Want To Run To You, which was recorded in June, was inserted into the sequence. And the somewhat experimental One Monday was recorded in Jeff’s bedroom. It originally featured a cheesy poem that I recited in a cheesier Scottish accent. Sparingly, only the last line survives in the mix used here.

In September Jeff bought an inexpensive cello. That he had never played a bowed instrument before didn’t deter him and his amateur yet surprisingly deft cello playing is featured on All I Want To Do, Stephanie Barber, Gothic Funk, One Monday, Johnna Johnna, and Nearly Winter. The first song he recorded with the cello was Stephanie Barber. Jeff was in the habit of using the real names of people he knew in his songs and I remember when he first met my friend Stephanie Barber, he commented, “What a great name for a song.” Another contribution to the sound of this collection was the fact that the only acoustic guitar we used in those days was a 12-string, often combined with Jeff’s clavichord, which is a small, portable keyboard from the baroque era that evokes a harpsichord but is very quiet. It’s featured at the beginning of Nearly Winter and Only A Fool and it can be heard in conjunction with the 12-string on In The Sky and Johnna Johnna, which are also fine examples of Jeff’s propensity for using an acoustic guitar as ersatz bongos.

In its day, Happy Halloween! was somewhat of a side-step, a back-step even, from Summer Of Lust. Although it was less ambitious than its predecessor, with only 8 songs (fitting on a C-30 cassette) and much more hastily recorded, some of the songs endured to become classic Pajamas. A harder version of Murder Of Crows was re-made for Book Of Hours and went on to become a staple of our live shows for many years. It even features on the 1996 live album Lust Never Sleeps. Gothic Funk was re-recorded in the mid-90s and appears on Indian Winter. And Stephanie Barber was for a time inserted in the mid-80s Green Monkey cassette re-release of Summer Of Lust.

This 2014 CD release contains a treasure trove of bonus tracks dug out of the vaults (technically a drawer full of cassettes in the care of Jeff Kelly). Thinking Only Of You (Lust Don’t Last) and All I Want To Do are the first Green Pajamas recordings with Steven Lawrence. With Steve on guitar, Jeff on drums and me on bass they were recorded in the attic jam room at my parents in January 1985 and eventually released on a lime green 7” EP in GOAR magazine #8 in 1993. In The Sky saw its first release in 2012 as part of For Lee Jackson In Space, a memorial tribute to Lee Jackson, a friend and rock journalist from Austin, Texas. Johnna Johnna resulted from a day-trip Jeff and Melody took to Olympia when he was so smitten by the waitress at a café there that he contemplated sending her a love letter but ended up with this song. Jeff’s Casio-heavy Walking In The Rain, recorded in his new apartment after he moved out of his parents’ house, dates from February 1985 making it the last song recorded in this collection. A few years later we remade Walking In The Rain with a Byrdsian jangle of guitars for the Ghosts Of Love LP. (Yet another version appears on The Complete Book Of Hours CD.) There are lots of unpolished gems here; Beatle-ish psych-pop songs like She’s So Weird and Everything Is Green; the Gordon Gano-esque Hate Song; the dreamlike I’ve Got A Crush On You, inspired by a dark and mystical girl we had our eyes on at an outdoor concert one August evening at the Seattle Center. This song was remade in 1999 and is the opening track on the Narcotic Kisses LP.

On the evening of Wednesday, December 19 This Winter’s Night was recorded live in the attic jam room at my parents’ house. We assembled our gang of friends to participate and since we intended to record the song live everyone there was recruited to play some little part in the production [see note below*]. Take one broke down half way through but with the tape still rolling the second and only complete take nailed it. Much Holiday merriment and Christmas cheer ensued, of which a small fragment that remained on the master tape can be heard—this was the 80s after all. At the end of the day, this Happy Halloween! release gives you a lovely snapshot of The Green Pajamas in the eight-month period between Summer of Lust and the sessions for Kim the Waitress, a time of low stress, high creativity and lots of fun.

Mastered by Tom Dyer from cassettes.

All of the recordings here came from cassette tapes recorded without noise reduction. The tape hiss was significantly reduced and some EQing was done to even things out. There are imperfections in the “masters” we worked with that you can hear, but the beauty far outweighs the flaws. Enjoy!