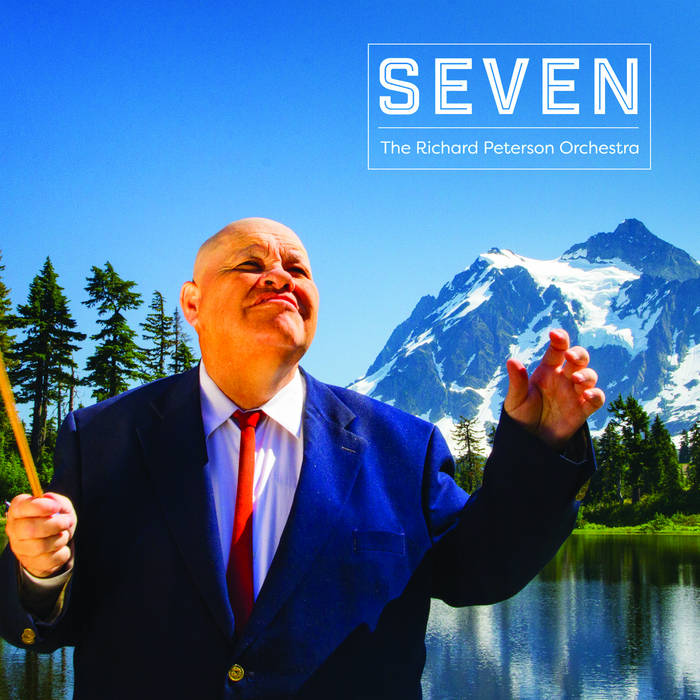 Green Monkey is proud to take up the mantle of being Richard Peterson’s label with the release of his new CD, SEVEN, releasing Friday, October 18. Richard Peterson is a Pacific Northwest institution, a well-known savant Seattle trumpet player/piano player/composer. His music is heavily influenced by the 1950’s and 60’s television soundtrack work of the Columbia and Ziv music production companies. In addition to being available in fine music stores, both in the US and internationally, the album will be available on all the major streaming and download services and at Green Monkey’s bandcamp store (greenmonkeyrecords.bandcamp.com/album/the-richard-peterson-orchestra-seven). We are working toward making Richard’s entire catalog available to you at some point in the future.

Richard will be performing on solo piano on Friday, Oct. 25, 2019, 7:00 pm at Tipsy Piano Bar, 514 Capitol Way, Olympia. This is Richard’s first Olympia piano performance. There is no cover charge for the event and you simply must attend.

Richard released his first 45 rpm single “Want to Be In The States” in 1976. He advanced his career by playing trumpet outside the football and baseball games for years. He has made records with many Seattle music celebrities. His debut full-length album, “Richard Peterson”, was released in 1982. In 1983, he released his second album, produced by Peter Barnes, from which the Stone Temple Pilots placed a track on their album “Purple”, which sold over 4 million copies. For those of you less familiar with, or even new to Richard’s work, there is extensive info available on his GMR artist page, greenmonkeyrecords.com/r-peterson/.

“Big City Dick: Richard Peterson’s First Movie”, a documentary about Mr. Peterson, was released in 2004. It won the audience award at the Slamdance film festival in Park City Utah. His penchant for early TV music gained him the friendship of Hollywood actor Jeff Bridges via his father Lloyd Bridges of 1950’s “Sea Hunt” fame. Based on this enduring friendship, Richard often opens for Jeff’s band “The Abiders” when they play the Seattle area. Look for "Big City Dick" on youtube.

His new record is appropriately tilted, Seven, and features The Richard Peterson Orchestra (which is all Richard). It is the culmination of his many influences and years of composing music. Seven features Richard’s compositions, his playing on piano, horns, synth oboe, bass, drums and harp as well as a variety of vocalists and a violin player. Both true and new fans of Mr. Peterson’s work are certain to enjoy Seven. It is Richard’s masterpiece.

I am listening to Seven as I write this and I must tell you it is a delight. Richard will impress you with the depth and clarity of his astonishing new masterpiece, Seven. We are confident you will marvel at this brilliant new offering. Please give it a listen!