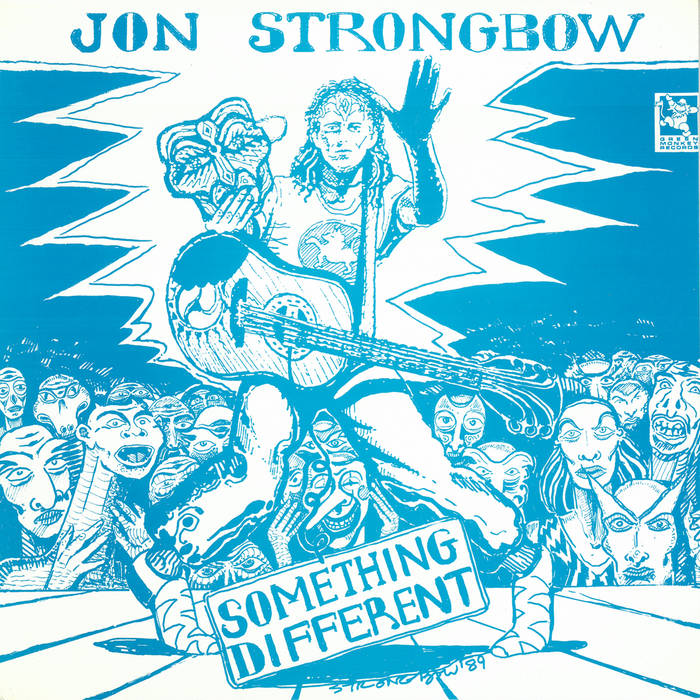 Something Different was recorded in Tom Dyer’s Green Monkey studio in 1988. The studio was in the basement of his North Queen Anne house. It was a tiny space, and I remember Marty was having problems with it, as he is quite tall and his head kept bumping the ceiling, and besides, he told me in all seriousness, it didn’t have a sauna room, and beautiful brunette girls with bodacious breasts.

Will Dowd brought his full drum kit and set it up, which also flipped Marty out, since all of our rehearsals and performances were very stripped down, with no rocking kit. Will turned out to be one of the best rock and roll drummers ever and he made the sessions a blast. Linda Severt, his multitalented gal-pal, was a brilliant percussionist as well. They both did excellent work.

So, as you can see, it was heads! I had no money at the time, but I met an amazing lady who claimed to be a supporter of the arts, and I brought her two projects, a graphic novel called The Fury of the Four Corners that I had just completed, and she liked it and gave me a thousand dollars to print it. So I did. The second project was the recording project. She gave me another thousand dollars for that, and I worked out a deal with Tom, in which he co-produced it and printed a few LP’s under the Green Monkey label. I considered it an artistic success at the time. That pesky darker album I had put so much of myself into was creating trouble. A lot of the tunes from that project eventually did get recorded, and are in a can somewhere, awaiting the mystical touch of spirit revival! In the mean time we are focusing on songs that were actually completed.

The sessions went fairly quickly, from late September to early November of 1988.

I brought in extra back-up vocalists. I knew Dee Chapman from the market. She was in a band at the time called Streetfire but she came in and wowed everyone with her singing on “Information” and “Angel Love.” In less than 2 years Dee would be backup singer and also doing tambourine and bass for The Get Well Soon Band and a few pieces from that period appear on the album What It Takes.

For the Something Different sessions I paired her with Roselle Williams, who was in a band called So Are You! They worked well together. On “Angel Love” we doubled them up and they sounded like an entire choir of angels. Roselle also sings back-ups on “Body of Knowledge.”

Laura Weller from Capping Day came in for the final two songs, “Struck by Lightning” and “Something Different.” Laura was a thoughtful person and I was still in the process of making up lyrics for the chorus while we recorded, but was stumped by this one part. I wanted to say something like “little tiny brain”, but felt it wasn’t good enough and she thought about it and said, “little human brain” which was perfect! I paired her with Anne Marie Ruljancich who told me she was a singer but wanted some studio experience. They both are great, as you can plainly hear!

For “Information” I brought in Michael Auchter, a local guitar genius, who did the most amazing little solo. It was actually two solos. I had him play it one time, and then used another track and he played it through again. We didn’t let him hear what he had done before, and that is why I believe it came out so wonderful and strange. Michael appears on several of my later instrumental albums and always lends class and thoughtful beauty to whatever he puts himself into.

After we mixed it, Tom brought it out on vinyl. I believe there were as few as 250 copies. It was a very small run. In 1992, I realized we had made so many changes in the way we performed the tunes that I brought the original master tapes into Patrick Donicht’s studio and we changed a lot of lyrics and a few musical arrangements. The biggest musical changes were made on “The Rest of My Life” where Marty came in and carried the entire song on the back of his beauteous fretless bass! This will be the first time we have released this album after making these changes. I also changed the lineup of the tunes a bit, which I feel helps the flow of the whole.

You might note that the song “Information” is a reworking of the song “Information Overload” from Alien City. Also, on the song “What It Means To Walk Alone” you might discover the synthesizer solo is also directly taken from “Dirty Heaven” on Alien City. Alien City was still looming inside me, and music from the unrecorded 3rd and 4th movements kept coming up and insisting that it get out into the world. I included a few of these as extras on the recent Alien City (Remastered) that Steve Turnidge mastered, and that Green Monkey released. But there was a song about a mental hospital that was actually intended for part three of Alien City that I kept reworking and changing and I include it as an extra at the tail end of this album.

Why didn’t I release it as an extra on the Alien City album? The answer is, “I can’t come back! I don’t know how it works!”

The three bonus tracks at the end of this CD feature Marty Sutlovich on fretless bass, and Patrick Donicht on drums. The recording of the song “No Place to Take a Friend” was originally laid down in 1992. I had Patrick modulate my voice, then added a wicked synthesizer solo toward the end, and that was about all I did to it! Then I remembered other tunes I was writing and performing at the time Something Different came out, and I remembered “Big Red Brick Cathedral” and “The Center of a Hurricane” which miraculously were in that same can I pulled “No Place To Take a Friend” out of. All three of these bonus tracks seem darker than the upbeat nature of Something Different, but I think they are great songs from that period, and I hope you do too!

The only other thing I can think to add is on the song “Multicolored Lights”…I am not saying “Multicolored Lies”…which many people actually believe I am saying. Just setting the record straight so to speak. I intended it to be a song about looking deeper into people, even those you consider your enemies, and seeing their spiritual nature, their auric field, their multicolored lights. But hey—lights, lies, whatever works for you!