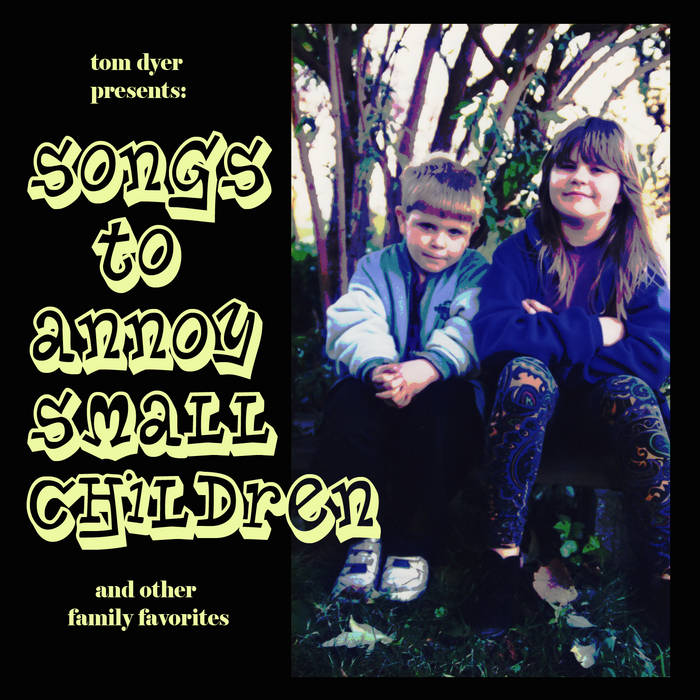 Video link for "There’s A Great Glowing Gasbag In The Sky, It's Called The Sun (Official Music Video)"; youtu.be/4iJSt4w2B90

Songs To Annoy Small Children is the latest bit of nonsense from the indefatigable Tom Dyer. This project began life in 1995 without a long-range plan. These were simple, made-up songs to be sung to his long-suffering children. The first was Bathtub Plug, an ode to a replacement plug in a claw foot bathtub. There were five songs total. Three were recorded, including the embarrassing Dyer Family Song. In December 2016, Dyer decided to complete the song cycle and recorded, in two days, the final two (including the masterpiece There’s A Great Glowing Gasbag In The Sky, It’s Called The Sun) plus a new concluding composition, They’re Old.

To add depth and muscle to this remarkable and irreverent artifact, two additional works are being presented herein.

First, are the Pirate Songs of Cap’n Kat and the SS Mediocrity. Recorded in 2005 at the zenith of the Johnny Depp pirate mania, these songs a) reflect on health issues encountered by knaves on the high seas and b) inventory the means needed for career success. The songs were composed and performed by Kat and Ben Dyer, who have most recently released material as The Dyer Spawn on GMR’s 2016 Xmas album.

Second, we have five songs by Susan Dyer, composed for and performed as part of the pantomime Aladdin & His Magic Lamp in 2002. This cast recording exists because Tom was on the East Coast and could not attend the play. He retained audio engineers to do a live studio recording of the entire performance. These were Ms. Dyer’s first featured compositions; she doubles as a performer in the role of Queen Dragona.

All songs written, recorded and performed by Tom Dyer.

Bathtub Plug, She’s Pullin’ The Head Off The Dog and The Dyer Family Song were recorded near the turn of the century. The others were recorded December 2016.

Cap’n Kat and the SS Mediocrity
Written and performed by Kat (Vox) and Ben Dyer (Gtr) as a Christmas present to their dad.

Recorded by Jay Follette and Kevin Bressler at AIS in 2002.

All songs ℗ Half The World Publishing © 2017 Green Monkey Records.

Hampton was the dog.