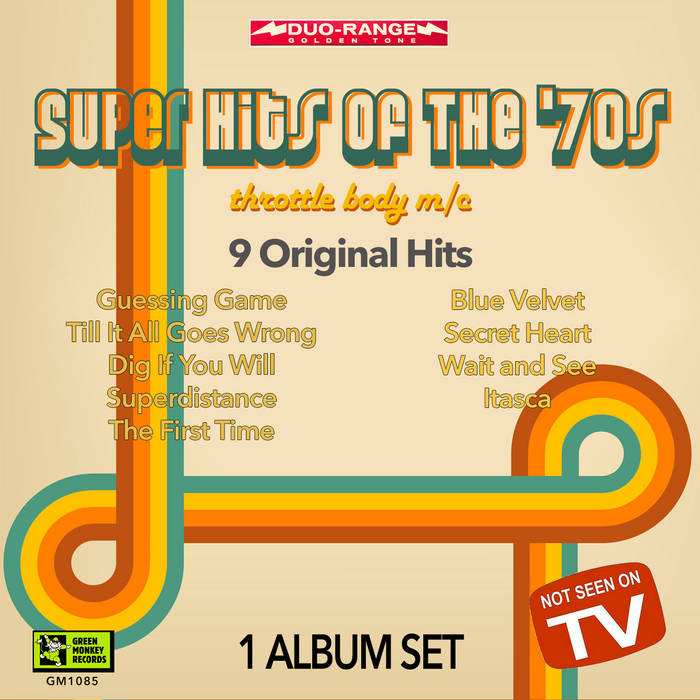 Break out the platform shoes and polyester suits, and pour the world a Brandy Alexander for the release of Super Hits Of The '70s —the fifth studio album from Throttle Body M/C. New members of the Green Monkey family, the long-time Seattle-now-Toronto-based collective is led by multi-instrumentalist, producer/engineer Jerry Hammack.

This time around, Jerry is joined by GMR guitar monster Rod Moody (The Fuzz, Swedish Finnish, Swallow, Spike), Aaron 'Coleslaw' Taylor (Radio Nationals, The Squirrels, Survey Cez') as he explores the pop, rock and soul sounds of early 1970s AM radio. “I have always loved that era of popular music,” Jerry states. “There was so much variety and richness in the Top 40 hits of coming across my radio and I thought it would be a fun to make an album that sounded like it belonged to that magical time.”

And from the first moments you’ve dialed into KJR in Seattle on a cool fall evening, you are transported with a feeling of déjà vu that you can’t quite put your finger on.

In the spring of 2020, Jerry wrote a series of nine songs Inspired by hits from artists like Gordon Lightfoot, Three Dog Night, Lou Reed, Stevie Wonder, Roberta Flack, Billy Paul, Bill Withers and Elton John and set to recording them in his Toronto studio with the help of Moody and Taylor (their collaborations coordinated from the Pacific Northwest through the magic of the Internet).

To dial in the sound of the era, he limited himself to the musical palettes of his inspirations. 'If the original track had two acoustic guitars, one electric, organ, bass, drums, a lead vocal and two backing vocalists, that's all I used.' In one instance (“Blue Velvet”), the song called for a full symphony orchestra and a horn section—so he used of those too!

Jerry also researched the studios where the original recordings were made, recreating them in multiple virtual classic studios that included London’s EMI, Olympic, and Trident and The Record Plant in New York. While not slavish, the recordings also stuck to the limitations of the era, with just a handful of processing and sweetening tools applied to the tracks. 'It was a challenge and a lot of fun to recreate those classic studios in my DAW and then record and mix the songs in them.'

Taken together, the songs are an homage to a wonderful variety of pop, rock and soul, but rather than giving you a clone of days gone by, he brings something familiar and completely new at the same time.

Jerry sent this heady mix to GMR and we said oh hell yeah.

Jerry is also author of the massive Beatles Recording Reference Manuals and a generally productive sort of fellow.