by Dante and Eros Faulk 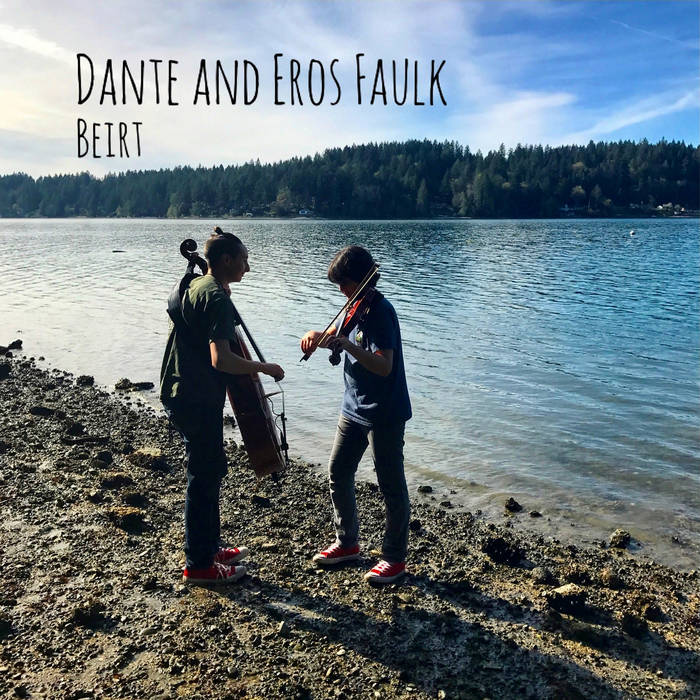 Beirt (Irish/Gaelic for twosome) is the debut album of brothers Dante and Eros Faulk, a cello/fiddle folk duo from Olympia, Washington. Both classically trained, the brothers now focus exclusively on a variety of folk and traditional styles of music, ranging from Celtic (Irish, Scottish, Cape Breton), Scandinavian, Quebecoise, to Old Time, Bluegrass and modern day fiddle tunes. They also play their own compositions.

Dante and Eros have been playing music their whole lives, both picked up a string instrument at the age of 3. Today, at 15 and 13, they are both multi-instrumentalists. In addition to cello and fiddle, they play guitar, bodhran (Irish drum), banjo, cajon (boxdrum), ukulele, mandolin and on occasion, they sing. Performing, recording and arranging are some of their favorite things to do! Eros develops most of the arrangements and set lists they perform. He has quickly become an expert historian on traditional folk tunes and artists and wrote the liner notes for the album. In addition to playing, Dante teaches private “traditional cello” lessons locally, and has also been holding cello workshops at local festivals.

As a duo and with their teen folk band REDS (with River and Sage Scheuerell), they have performed in a variety of private and public events, local markets and festivals. They appeared at the Oly Old Time Festival, Bellingham Folk Festival, Olympia Fall Fiddle Fest, and The Washington Center for the Performing Arts Young Arts Ambassador Showcase. They have opened for the acknowledged masters of the field, the Scottish/American duo Alasdair Fraser and Natalie Haas. In July of 2017, they will be opening for another world renowned duo, Newgrass masters Darol Anger and Rushad Eggleston.

Dante and Eros’ Beirt is a inspiring first step in a long journey for two talented young men. Expect to hear much more!