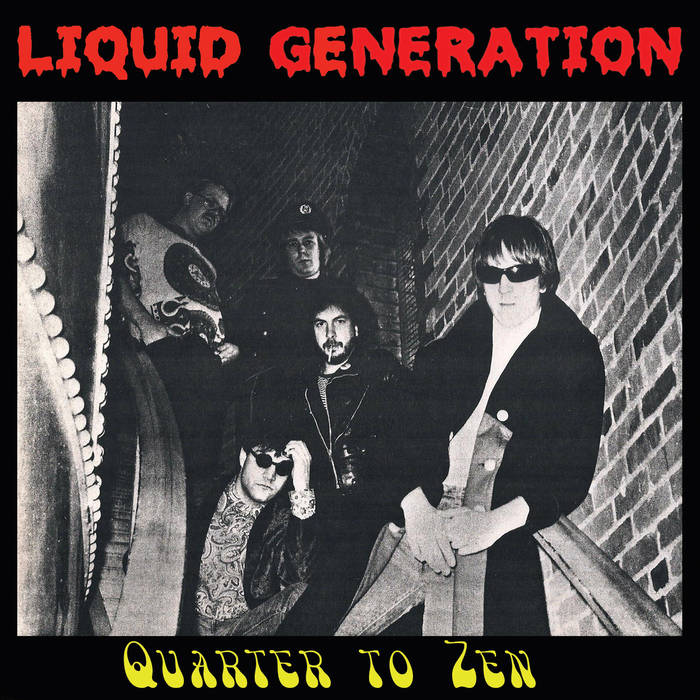 So we finally got off our ass and are putting out our first release of 2016, Liquid Generation – Quarter to Zen! Liquid Generation was one of Seattle's earliest Neo-Psyche bands in the early ‘80s. Together for barely one year, 1984, if you blinked you missed them. They released one rocking/rave-up single on Green Monkey, “1/4 to Zen” b/w “I Love You,” then they were gone.

Now they’re back (sort of) with their first CD, Quarter To Zen, all recorded long ago in the purity of 4 & 8-track analog, pushing the VU needle way into the red.

The band started with Randy Nash (drums), John Branin (lead guitar) and a then 17-year-old high school senior Jeremy Meyer on vocals. Bob Blackburn (rhythm guitar) and John Conrard (bass) came aboard and they were ready to rip it up.

Taking their cue from the spate of Pebbles/Nuggets style re-issues of the early ‘80s, they picked up the gauntlet and ran with it, covering the usual suspects, British Invasion bands like Them, The Kinks, The Troggs as well as even more obscure ‘60s bands, like The Remains, The Choir, The Ugly Ducklings, The Gants, and The Chob. They were proud flag bearers for the Pacific NW rock and roll scene with songs by The Wailers, Don & The Goodtimes and more. Many of those songs are gathered here as well as a splattering of their own compositions.

Liquid Generation 25th reunon gig at the Green Monkey Records release party 2009 Showbox Sodo, SeattleBack when, the band played a handful of obscure shows. I don’t think I ever saw them live. Later, they wandered off to become newspaper reporters, insurance adjusters and sound designers for theater. You know, grown-ups. They played a one-off 25th anniversary show in 2009 marking the release of the Green Monkey comp It Crawled From The Basement. Proximity gave them the strange notion that the universe needed to hear the psycho-thunder of the LG sound once again.

So here we are in 2016. One reissued single, plus 15 ripping bonus tracks. Nothing pretty or sweet, nothing clever, just pure garage rock from five younger men with nothing to lose.

Recorded by Tom Dyer, John Rogers and somebody else at various places a long time ago.
Mastered by Tom Dyer; Cover photo by Lewis Allen; All other photos by Tracey Consolo Hardy;
45 illustration by Robert Contreras; CD cover design and layout: Tom Dyer;
Helana Rogers, bass on "Little Girl"; Brad Davis, guitar on "This Is The World We Live In” & “Endless Summer”