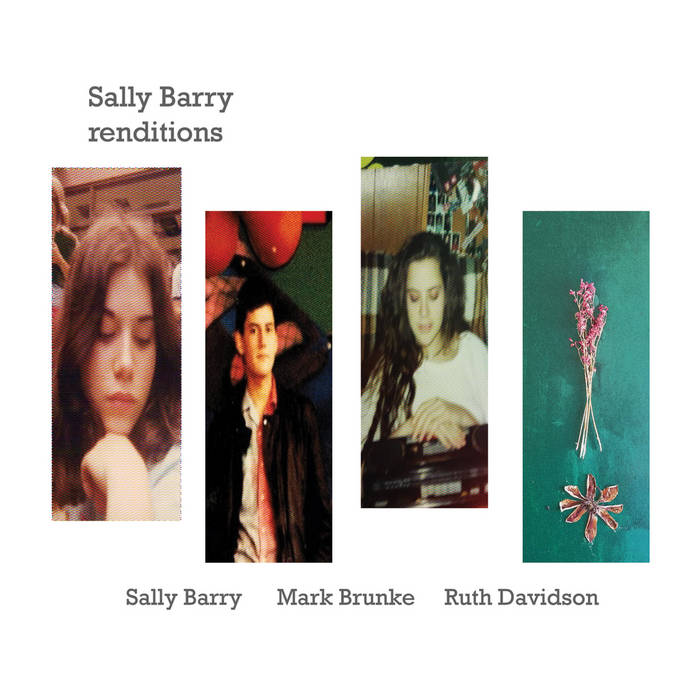 Mark Brunke is a guy I have known for 10-15 years, a musician and an artist (you know, the paint kind). Nine or ten months ago or so Mark says he’s got something that we could do for my 1+1 =? album which was slowly heading toward the finish line. He shows up for a day with a guitar piece that I add vocals and other stuff to and we end up with the album closer, “Barbra.” Mark tells me to put 3 days in my calendar for a project, I say sure, do it and then forget about it. A week before the session Mark says “you ready”? “Huh, sure.”Sally, Mark & Ruth

Mark shows up with guitar demon Ruth and songbird Sally who flies in from Connecticut and is usually a drummer though she did go to college as a voice student and they proceed to record 23 songs in two 12 hour marathon sessions. On a third day we mix all the songs. I go back and remix them all a week later because I want them to be more beautiful, because I think there is something really happening here. This does not sound all that normal. One thing leads to another and now it is out on GMR. I am listening to it as I write this and find it darkly exquisite. Those of you that follow our releases know they are an acquired taste; the masses are not flocking to them, just the aficionados. For the peculiarly inclined, I highly recommend this roadside attraction.

Sally Barry is a person. Renditions is collaborative group project by Sally Barry, Mark Brunke, and Ruth Davidson. Three classical music dropouts who found punk, noise, prog, and metal more to their liking. Sally sings, Mark and Ruth play nylon string guitars, Ruth plays cello. This is the Americana of death, blood, cancer, and drugs. This is a rendition to another kind of country music. This is the rest of us, littering a quiet despair. This is a song cycle about America, today.

Sally provides the vocals, bringing Mark’s words to life with the rage and experience of punk rock’s frontline. Mark is the lyricist, culling songs from as far back as 1984, but primarily from 1995-1999. He provides the rhythm or foundation guitar setting for the words.
Ruth DavidsonRuth Davidson brings a deep experience in progressive music and crust punk, layering harmonic brilliance over Mark’s pop and classical tendencies, illustrating with six-string nuance and complexity. Listen to Ruth loosen and obliterate the foundations of rock with their twin guitar approach on the outro to “Come in Electronica.” That’s all Ruth. Their acoustic genius takes “Green Elizabeth,” “American Pop,” and “Radio Down” to unexpected heights. Sally brings it all together, allowing the words to breathe, putting everything in service of the song. These are Art Songs. They are primarily through-composed, with Mark’s arrangements drawn mainly from progressive rock, but without the solos, owing as much to the music of the Ars Nova and Bach as to the poetic minimalism of D. Boon.

Sally BarrySally is music school dropout who fell into the NYC punk scene in the mid-80s. After drumming with the seminal scum rock band The Honeymoon Killers and time as the road drummer for Bewitched, Sally found herself in STP (Hey, Bastard!) on the West Coast leg of a tour that changed American music with Nirvana and Sonic Youth in 1990. Nobody’s sure what happened to those bands. The music here more closely resembles her work on the tune “Sunrise” from Mark Lanegan’s Whiskey For The Holy Ghost. Nobody’s sure what happened to him either. In 1997, she released a cassette-only solo project from Mark Brunke, The Diets –The Coming Electronica. Many of these songs stem from that time. Sally: Mark was fishing though old songs the last five or six years and decided to put some down in this project. I am familiar with many of the songs, but not others. Half of them tell the story of our relationship back in the 1990s, its highs and lows, and the falling apart after Mark’s mom died of a heroin overdose in 1997, the same year she recovered from breast cancer. Mark BrunkeMark: After my mother beat cancer, she lost her benefits, and ended up homeless, and though she’d been clean for over a year went back to using to manage pain from undiagnosed internal bleeding. My relationship with Sally didn’t survive that, but the songs are still around. The rest speak to what we all live: love, loss, marriages, divorces, birth, disease physical and mental, death real and spiritual, everything else that happened in the intervening twenty years, if you get to live that long. This is the underlying story. ### We have something unusual with this release for the lovers of collectability and art. Mark has made 19 “album covers” available with the album for the first 19 folks that want and need. These are 12 x 12 acrylic paintings on canvas, all thematically related but each unique, individual. They are not actually intended to file with your LPs. Wall stock!