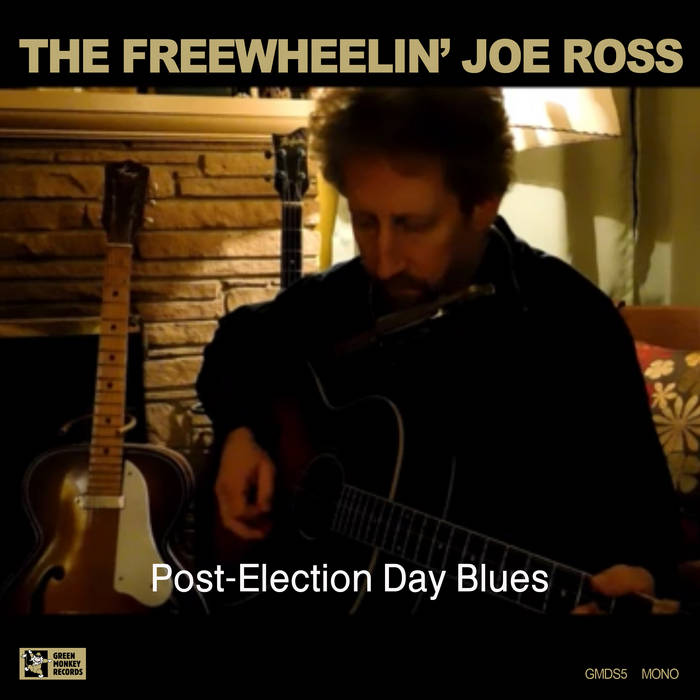 Green Monkey Records is releasing a topical digital single by Joe Ross of the Green Pajamas today. “Post-Election Day Blues” was written by Joe the day after the 2016 US election and recorded that night. By the next day The Freewheelin’ Joe Ross had put a video of the song on Facebook and was garnering attention from the like-minded.

While Green Monkey Records is generally not too political, we have always been an artist’s label first. Joe’s song is a valid political expression and we support that. Joe has something to say and he is saying it now. In keeping with Joe’s simple approach, nothing has been done to pretty this release up. It is Joe’s home recording done straight to a cheap video camera. No editing. No nothing.

Joe: The title of the song and most of the lines were composed in my head as I was strolling home after walking my son to school the morning after the election. I quickly jotted them down on paper when I got home. In my mind I was imagining it as more of a Delta Blues, but of course in the end it came out sounding more like Bob Dylan than Muddy Waters. I video-recorded it that night after the kids and wife had gone to bed.

There are three takes. This is the middle one.

Long-time Pajama Joe Ross has released a second video with his thoughts on Mr. Trump, Inauguration Day Blues, which follows up his previous Post-Election Day Blues.

These are simple videos. One man, one guitar, one camera in his living room. Joe, telling you straight what he thinks. In addition to being on YouTube, Green Monkey has made Inauguration Day Blues available as the B Side of the bandcamp download single Post- Election Day Blues.