See You In Seattle 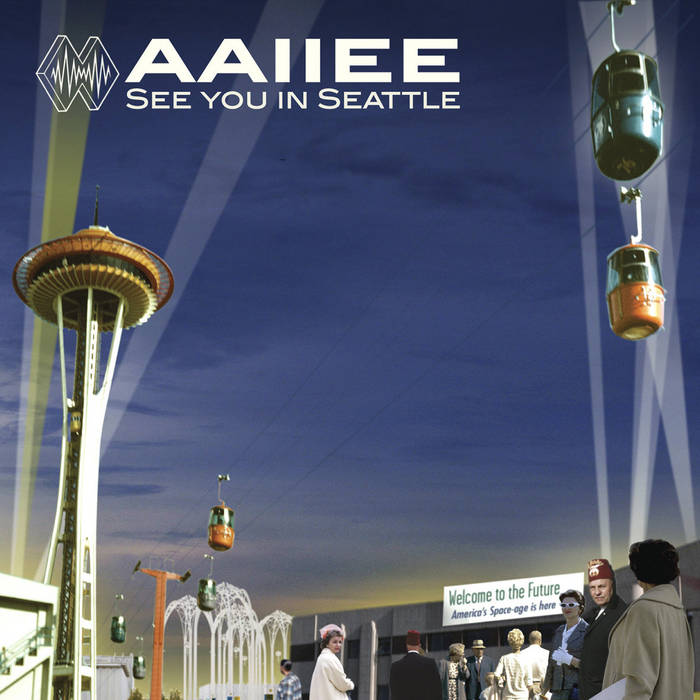 Aaiiee was formed in 1981 (shortly after Ronald Reagan took office) by Jeff Larson and Johnny Vinyl, who had previously performed together in the punk-pop band The Missing Link and the punk Cleavage (with Duff McKagan). Johnny also played with Radios (1979) and can be heard with The Macs on the “Seattle Syndrome I” compilation.

Eventually aaiiee recruited drummer Dave Shumate, who along with Scott Dittman and Al & Kurt Bloch made up the Cheaters, fixtures of the late ‘70s Seattle punk club The Bird. Soon after Dave joined, aaiiee discovered Craig Flory, who had been toiling in eastside cover bands and jazz fusion groups.

Aaiiee debuted at the UCT Hall in the summer of 1981 on a bill with the Fastbacks and U-Men (also their first gig). Initially, the name of the band consisted of a symbol (see above) and a pronunciation closely approximating a guttural scream. The name of the band confounded the press, who attempted phonetic spellings (Aieee…, Eeeegh, reHerrr, Unheiii!, EEEE) and descriptive names (No Name, and That Band that Uses a Symbol for Their Name). The name prompted one journalist to declare, “I will NOT draw that stupid symbol.” It should be noted that the band chose a symbol as their name long before Prince tried the same thing. Had he consulted with them first, they would have warned him of the commercial limitations of such a moniker.

aaiiee 1990Aaiiee’s early shows were usually with local punk bands, sharing the stage with Silly Killers, Fastbacks, U-Men, The Living, 3 Swimmers, Children of Kellogg, Gary Wilson, and more. Those who attended these shows were sometimes confused and even angered by music that went beyond “guitar, bass & drums.” Craig often alternated between cello, flute, clarinet, saxophone, and synthesizer in one set. Local publication The Rocket described their early songs as “hyperkinetic circus music” and “jaunty mini-marches.”

Brent took over the drum throne in 1991 after Dave left to attend school in California. He had previously played in Sway (with Kim Warnick), Nood Hood Bood & the Tiles, and reportedly taught U-Men drummer Charlie Ryan how to play his instrument.

GregGreg Stumph is “the new guy,” having joined aaiiee in 1992. (Craig Flory had taken leave, being in high demand for paying gigs.) Greg was added on second guitar after the band had performed as a three-piece for a while. He had previously played in The Crows, co-founded by former U-Men John Bigley and Charlie Ryan.

After over 30 years together, the band “aaiiee” is finally releasing their first full-length CD. Despite decades of habitual laziness, procrastination, and long periods of inactivity, this herculean labor of love is now complete!

“See You in Seattle” presents twelve fun & finely wrought tributes to this halcyon era. We hope you enjoy the ride!